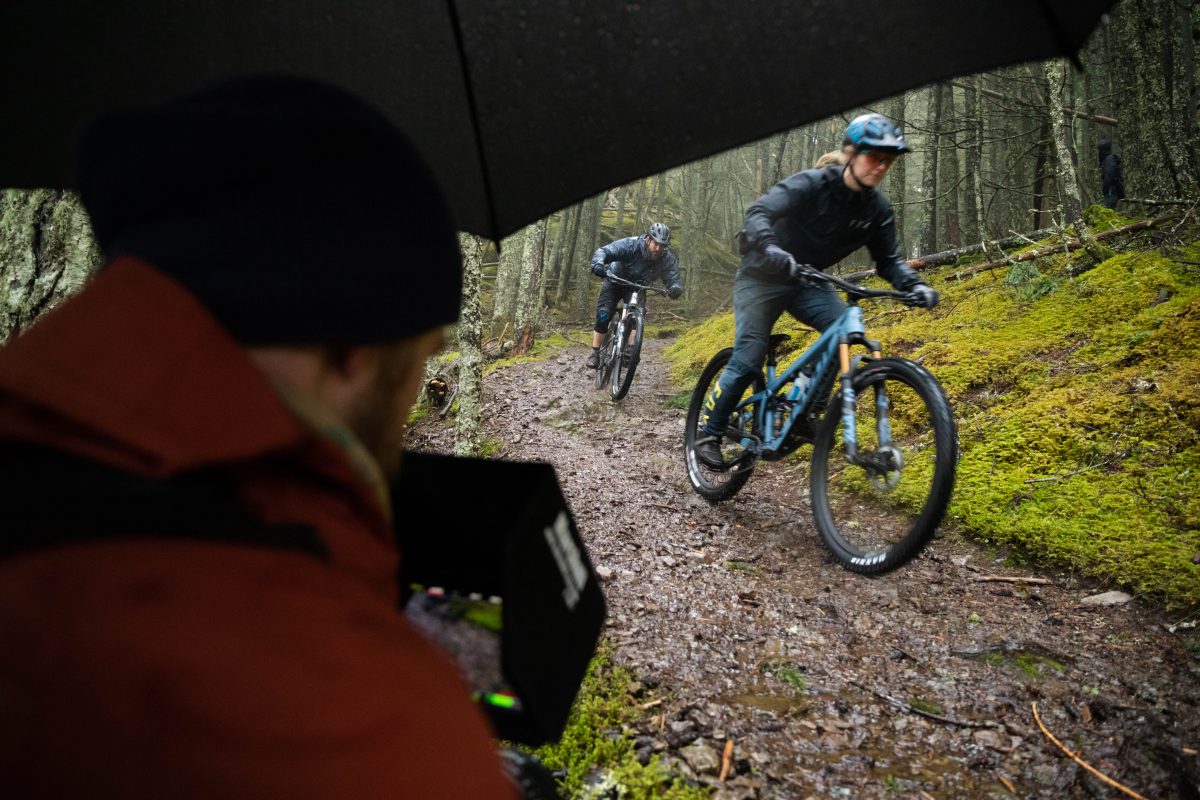 Behind the Scenes: Trail 429 Launch

Behind the Scenes: Trail 429 Launch

My forehead pushed into the airplane window as the clouds parted and we descended over Seattle.

If you live in the arid American West, you never forget the first time you fly into the Pacific Northwest. It’s a region and ecosystem teeming with life that leaves a lasting impression on you. Our journey would take us far outside metro Seattle, to a place with no stop lights, only accessible by boat or plane.

An hour-long ferry ride through the San Juan Archipelago took us through hundreds of islands between Vancouver Island and the continental mainland.

Our destination, Orcas Island, is the largest of the San Juan Islands and bears a distinct horseshoe shape. We were there on assignment to create a launch video for the newly designed Pivot Trail 429 mountain bike.

It’s no surprise Pivot chose this location for the launch video.

When they approached me about the project earlier in the year, I was thrilled to be able to film in such an incredible location, but I knew there would be inherent challenges. Rain, wind, short days, and incredibly low light canopy forests would all have to be taken into consideration. Also, due to seasonal closure, we’d be filming in December, one of the more wet and cold months on the island. From our initial conversations, we knew this project had to be different than your normal shred edit. Not only did we want to retain a high production value, but the focus needed to be on the environmental experience, rather than the product alone. For many people, myself included, mountain biking is the experience of going to incredible places. Showcasing that experience was at the center of our creative efforts.

Orcas Island is an incredibly unique and beautiful place. Within the San Juan Islands it has the most year-round residents, the highest point of elevation – Mt. Constitution – the most varied mountain terrain. Indigenous Coast Salish communities inhabited the island for generations and written records describe abundant Salmon, shellfish, and deer. The hunter-gatherer Lummi Tribe seasonally traveled around the archipelago. With intimate knowledge of local ecology, they developed an innovative fishing technology known as reef netting, a technique still used by sustainable seafood cooperatives today. In more recent history, local citizens and land managers have realized the importance of keeping Orcas Island protected from unchecked development. Currently, a large number of nature preserves protect more than 19,000 acres within the San Juan Islands, some of which have become public land.

With over 5,000 acres of dense, dank forest, Moran State Park is the largest track of public land in the San Juans. The Civilian Conservation Corps under Roosevelt’s New Deal worked for years to improve infrastructure and trails, ultimately building a road to the top of Mt. Constitution. This paved road is a huge part of the appeal to mountain biking on the island. From September to May, when the trails are open to biking, riders from all around the region flock to the park to shuttle up its steep grade. And after a few loamy laps among giant, old-growth conifers, it’s easy to see why. Three-hundred-year-old trees surround a mountain lake that sits just a mile from the sound. Over 200 species of moss flora blanket the island. Vistas in any direction reveal more wilderness, more mountains, and more islands. In a time where development and urbanization are the norm, the island forests give you a ticket to step back in time, to experience temperate landscapes in a more natural state.

Pre-production involved extensive scouting and planning. I created detailed flight plans with sectional charts that required approval by the State Park System before we could fly the drone. We’d be filming with two different camera systems, a Red Dragon 6k on tripod and handheld, and a Sony A7S III on a gimbal. The recent release of this camera and increased bit depth would allow for it to be paired with the Red. Using this small camera on a gimbal was essential to moving quickly and getting dynamic and fast paced shots to accompany the more static shots of the A camera. To say I was impressed by the performance of the Sony would be an understatement. It’s a bomber, weather sealed camera that just continued to perform, despite the cold and wet conditions. The files captured were mind blowing, with a huge amount of dynamic range and latitude for grading. The Red, on the other hand, would require a lot more attention and protection.

An umbrella was on deck at all times to keep the upper vents protected from rainfall. And the extreme low light under the canopy of trees would sometimes create a situation where I had to push the ISO so high that the files just fell apart. But when the light was adequate, the camera performed incredibly. All of the time lapses in the film were shot on the Red, as well as the motion portraits of the riders. The Red has this advanced color science that just makes skin tones look amazing. Ultimately, the footage used in the final film would be about 60% from the Sony and 40% from the Red Dragon.

I appreciate Pivot Cycles’ decision to feature local riders in many of their bike launch videos: in this case it really allowed for more authenticity when it came to showcasing the riding.

We worked with two local riders, both with incredibly competent and creative riding styles. Over the course of three production days we used every ounce of available daylight to capture the assets needed for the launch. A Sprinter van transported gear and bikes and sheltered us when downpours became too intense for shooting.

We went into this project knowing we’d face adverse weather conditions, but I don’t think I truly understood just how wet it would be. Everything just stays soggy, and it takes an immense amount of work – combined with a miracle – to keep expensive camera equipment from the same fate. That, combined with low temps, made shooting both logistically and physically challenging. Hands never truly warm up, batteries constantly drain, and our camera lenses accumulated condensation. Both our riders were troopers but asking them to dive into technical terrain when conditions were subpar made for lots of hard crashes.

After days of searching for blue skies

we found a shimmer of hope in the forecast. Yet as we moved around the mountain, we got quick glimpses of the clouds breaking, and then were immediately socked in again. We had already gotten so many great clips, but at this point capturing some beautiful light would really bring together the whole story. We’d see portions of the mountain in the sun, make a collective decision to move there, only to be under cloud cover again.

REFLECTING ON THE PRODUCTION

I realize I’m beginning to understand what separates successful shoots from those that fail to deliver. You can have the world’s best equipment in the most incredible locations, and the defining success factor will always be the humans.  Surrounding yourself with a hardworking and dedicated team that can rally together to weather the storm will always be the most important variable. Staying present during the shoot, experiencing the natural world in all her forms, and being part of the right team: these are the inherent challenges and rewards of any project.

after relocating multiple times in the Park, we tried the lookout one last time.

Just as we all second guessed the time we wasted chasing the sun, it happened: An hour before sunset the clouds parted, the fog rolled out, and we were rewarded with some of the most beautiful views I’ve seen in my life. I launched the drone, hit record, and captured what would become the final scene of the film. The warm light spilled onto the riders as they pedaled out to the edge of the overlook. It’s a scene that I’ll remember for the rest of my life.

Close Menu
Cookies help us deliver our services. By using our services, you agree to our use of cookies.OkPrivacy policy