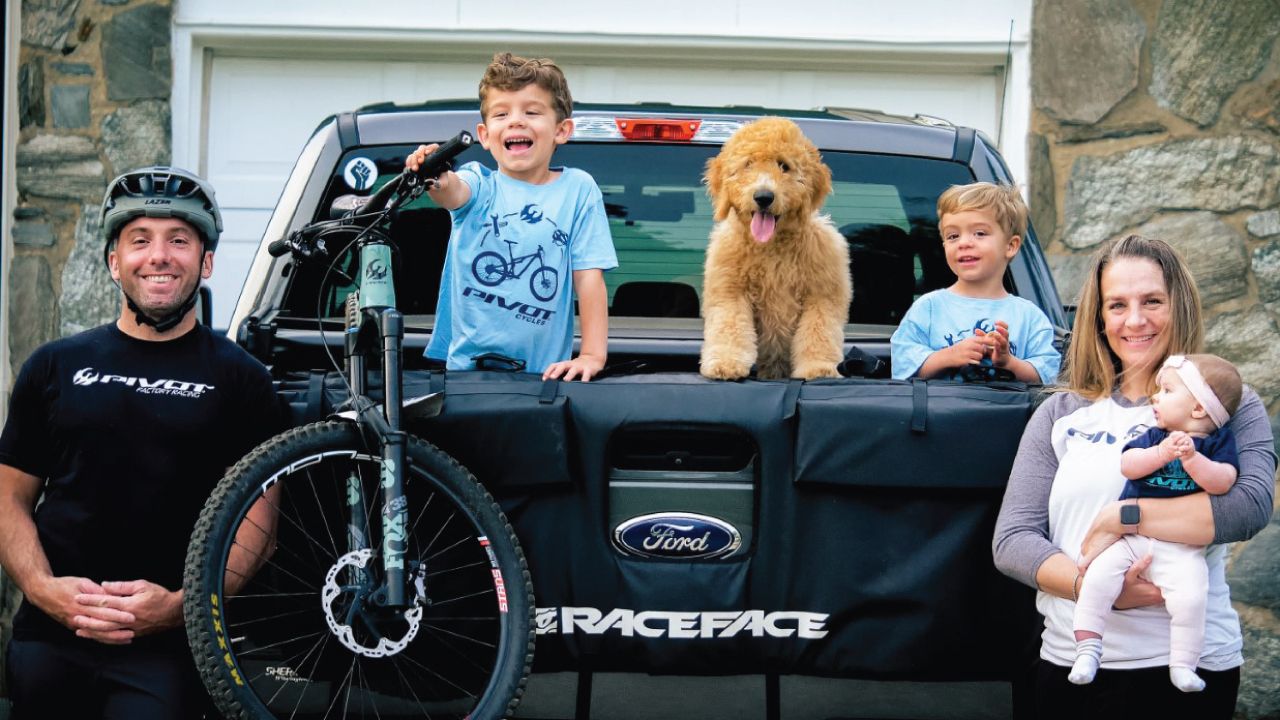 Often people’s perception of a dream comes with a natural overemphasis of the positives, rarely ever stopping to consider any inherent sacrifices.

Three kids, a dog, a wife and traveling around the country showing riders what to expect when shredding the backwoods of America: they go together hand in hand, right? Not so much. But even with the tax of lost family time, there is no other job Pivot athlete and storyteller Brice Shirbach would rather be doing.

with bike in tow characterize a large portion of Brice’s life. As a professional athlete and storyteller, Brice is the creator of our “Sight Unseen” series, Pinkbike’s “Local Flavours,” and Pearl Izumi’s “Underexposed.” Hailing from the Mid-Atlantic, Brice has been living every young shredder’s dream for almost a decade – getting paid to travel around the country shredding and documenting the best trails a particular region has to offer.

Brice realized this dream in college,

drooling over the action shots and stories that filled his favorite ski and snowboarding magazines. Drawing inspiration from these magazines and realizing the lack of coverage the east coast garners in the mountain bike world, he took the only logical next step: he created a website called fattirefests.com.

“I saw the push for mountain biking coming, and I wanted to get to the forefront of storytelling. Telling the stories of people and places and help the greater good of the sport.”

Fattirefests.com featured an assortment of photos, stories and people Brice met on his mountain bike journeys up and down the east coast. In the years after launching the website, fattirefests.com grew and garnered attention, but not quit–your–day–job–and–do–this–fulltime attention.

With a mortgage, wife and his first son, Logan, right around the corner, Brice supplemented his income by bartending and waiting tables. That was until 2014 when partnerships with BMC and Pinkbike allowed him to make the leap to fulltime mountain bike athlete and storyteller. This partnership is what spurred Brice’s first series with Pinkbike “East Bound and Down,” which explored the highly neglected east coast riding scene, and what it had to offer.

“When you first get started in this career, you have a famine mentality, meaning you’re saying yes to just about everything because you don’t want it to go away,”

Though he had shed the strings of a day job, it was not until 2016 that Brice felt truly independent, and he could start saying “no,” to offers. A deal with Pivot Cycles and the increasing recognition of his work’s value aided this self-revelation. While saying “no,” does not seem like a big hurdle to cross, as a father and husband working to make a career as a mountain bike content creator, this was a huge professional milestone.

2018 brought another milestone for Brice as he continued his partnership with Pivot Cycles. Brice and the brand partnered to create a limited web-series titled “Shop Stop.”  The edits captured Brice visiting numerous shops on the east coast to learn about the shop’s culture and people, and what they were doing to help better their communities.

It was also in 2018 that Brice scored a continuing blog run with Pinkbike called “Local Flavours,” a Bourdainesque series in which Brice explored an area’s trails, sampled local food and connected with the people who made up the region’s mountain bike scene.

As Brice’s career grew so did his family,

bringing two more children into the world, Henry (3) and Hazel (9 months). Juggling a growing career and family led to a new set of challenges and being away for work came with a new set of drawbacks, but with things coming together, and his dream jobs in his clutches, Brice persevered. Learning to navigate a 3-child household and a career with an intensive travel schedule was no easy feat, and admittedly, without his wife, Megan, it would not have been possible.

“It’s hard to be away, but it’s also a gift to be able to do what I do for a living, so to mitigate the impact my travels have, I’ve learned to plan as far in advance of travel as possible.”

Having your dream job and the support of your family is not the worst thing in world; however, when your dream job requires 12-14 weeks of travel a year there is a tax to pay. That tax is the irreplaceable time Brice spends away from his wife and kids, and to him, it is the worst part of his job.

Brice has discovered ways to help

mitigate some of the pressures his travels put on his wife and kids, even from thousands of miles away. He sometimes orders dinner from hundreds of miles away and schedules it for delivery, as well continuing to manage household matters like calls to daycare or the vet.  He keeps Megan’s stress management equally important as his own.

Brice’s continued success of balancing both a growing family and a dream career is admirable, and extremely impressive. It takes a strong relationship and a resounding effort to juggle what Brice and Megan both do. Brice is able to realize his career as a mountain bike athlete and storyteller because he treats his business like a business, and pairs it with a strong support system at home.  This powerful combo has propelled him to where he is today.

Looking ahead, Brice plans to keep motivated as an athlete and storyteller. He is also planning on entering the race scene again in the near future. So be on the lookout for what he has coming up next!

“…in the end, the time away and stress that comes with it, is the personal tax I pay for what is otherwise an incredible career path.”